Well, the COVID-19 period in Canada has begun. People are self-isolating, social distancing, and cancelling events (rightfully) across the country. Of course, the most important thing in all of this is the health of vulnerable people and ensuring that this pandemic does not overwhelm the Canadian healthcare system.

Remember when we were talking about shoes…?

At the same time however, the Tokyo Olympics are set to continue. The Games, which are expected to kick off at the end of July remain beacon of hope for the sports world which is currently operating without hockey, basketball, cycling, running, soccer, and even curling. If you’re like me and you love watching sports, you’re likely starting to go crazy, but can you imagine what the athletes are feeling?

Although many athletes have qualified for these Olympics, there are many spots that are still up for grabs. For example, Canada is not close whatsoever to naming their Athletics team for the Games, especially the men’s marathon team. Currently, Trevor Hofbauer is the only Canadian man who has run the standard, and did this at the Scoitabank Toronto Waterfront Marathon last fall. with spring races cancelled the likes of Reid Coolsaet, Dylan Wykes, Cam Levins, Evan Esselink, Tristan Woodfine, Ben Preisner, and many more as of now have no races available to qualify for the games.

With some extra time on my hands due to the lack of watching sports, I decided to come up with options for these Canadian men to have a chance at lining up in Rio. I would have also looked at this from the perspective of Canadian women, but four of them already have the standard and therefore Canada will send a full team.

This option, although viable for now, may prove not to be in the next couple of weeks. The Ottawa Marathon is scheduled to occur the final week of May and thus far has not been cancelled. 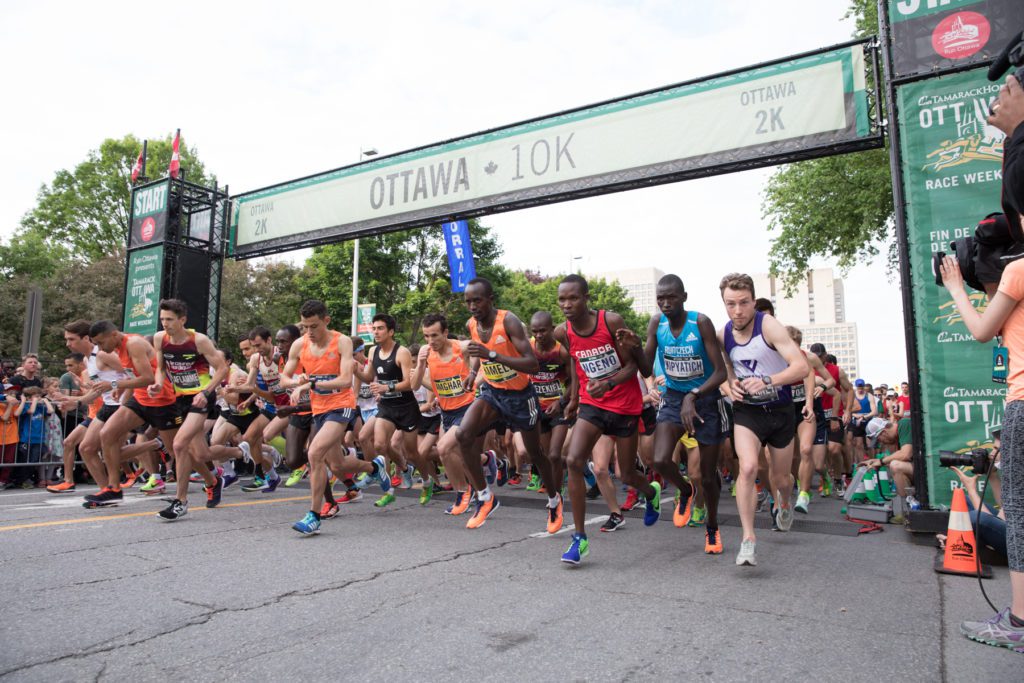 The Ottawa Marathon is a Gold Label race and the weekend doubles as the Canadian 10K Championships. As a Gold label race, the top five finishers would automatically receive the Olympic standard. However, if the Ottawa Marathon does go ahead, a top five finish would be unlikely for any Canadian runner as the race would likely become VERY popular worldwide as the last weekend to qualify for the Olympic Games. However, the depth which the race would gain from around the world, particularly Europe and East Africa, would also provide Canadian runners an opportunity to run fast. Although it is not a particularly fast course, the Ottawa Marathon often doesn’t have the same depth in an elite field of say a London, Berlin or even CIM, but with the world congregating to run the race, it would certainly change.

In turn, the race going ahead would likely see all of the Canadian hopefuls for the Olympic Marathon congregate and aim for the time of 2:11:30. It would then be up to Athletics Canada and the Ottawa Marathon to provide a pacemaker at this pace and to select to the Olympic team the top two Canadian finishers (if they achieve the standard).

Another option, and this is less likely, is that World Athletics alters the qualifying process for the Olympic marathon to accommodate for the COVID-19 pandemic. The reason I say this is unlikely, is when the Olympic standards and qualifying procedures for Tokyo were released, World Athletics wanted to cap the field size for the marathon at 90. Currently, it is expected that the field size for the race is already exceeding 90 men.

Furthermore, any accommodation for countries impacted by COVID-19 would be extremely controversial and would be subject to world ranking. World ranking is a very complicated practice which you can read about on the World Athletics website.  Essentially, the system is a compilation of results and times run. Governing bodies will have the opportunity to put names forward based on world ranking, but which countries are provided spots would be up for debate.

Unless World Athletic drastically changes their policies surrounding the Olympic field, competitors cannot expect to get into the Games via world ranking.

If the Olympic Games do look like they will go ahead, Athletics Canada only has one other option and that is to host an exclusive Canadian Olympic Trials event. Unlike the U.S. Olympic Marathon Trials however, it would be difficult to obtain a Gold Label status and competitors would still have to hit the standard – still it would be an opportunity to hit the standard.

This race could be hosted practically anywhere. All Athletics Canada would need would be an official course measurement, timing, drink stations and a camera crew to broadcast the race. This idea, which was put into my mind by Canadian Olympian Reid Coolsaet would be open to those who have run under the time of say 2:22 in the last four years and would have a field size of about twelve to fourteen runners. Those who Athletics Canada would then name to the Olympic team would be the first two runners to finish under the standard.

The best part is that this could all be put together with less than 50 people, making the event passable by the Ontario and Federal Government who have persons limits due to the pandemic

When could this happen? Anytime really but the first week or two of May seem most practical.

Of course, all of the above options should not happen if they bring potential harm or spread to vulnerable populations.

Until next time, stay healthy and stay home (unless you’re going for a solo run).